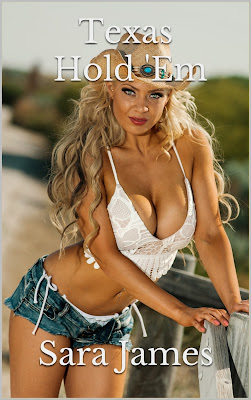 My latest story, "Texas Hold 'Em" is now available for sale on Amazon.

I started working on this story in June of last year (2016). It was originally one of my procrastination projects, based on a simple, sexy premise: a guy loses his manhood in a poker game. Poker led to Texas hold 'em, which made turning the main character into a sexy Texas cheerleader an inevitability. The name of the game also led to what I think is an obvious double entendre. (Double. Get it? Bah-dah, bum. *Tish.*)

The story was originally supposed to end after chapter 13, Into The Sunset. By the time I got that far, though, the story and its characters had taken on a life of their own. What I intended as a short, fun, sex romp became a more serious dramatic conflict that segues into a romance. It felt very organic as I was writing it.

As for the romance itself, if you liked the ending of "The Party Favor," I think you may like this story's ending even more. I think that what I'm most proud of isn't where the story ends up, but the journey the main character takes to get there.

The popular saying about everything from Texas being bigger is the main reason Ken's favorite football team - and their famous cheerleading squad - is from the Lone Star state. When he has a chance to win big at his weekly poker game, he bets big and loses even bigger. Now he's stuck as a buxom Texan beauty, forced to cope with a body that's a real handful ... and then some! But the real game begins when the night is over and the stakes are raised to include his marriage, his children, and the direction the rest of his life will take.

The story is my longest to date. So long, in fact, that I'm working on a paperback version. Yes, it's long enough to be made into an actual book. It comes in at about 280 pages in dead tree format (closer to 190-200 in my standard working format; the smaller page size adds to the length). That version is going to be on sale as soon as I can get the *insert choice profanity here* formatting to do what I want it to do. If you can't wait, the ebook is priced at $5.95, unless of course you have Kindle Unlimited, in which case it's FREE with your subscription, as are all my stories.

PS - For those of you keeping tabs on what I'm up to, my Twitter feed is now probably the best way to keep track of me. Most of the time, I post there. If I have too much to say for Twitter to handle, I still use Blogger but include a link back to the post here in my Twitter feed.
Posted by Miss Sara James at 12:15 PM No comments: